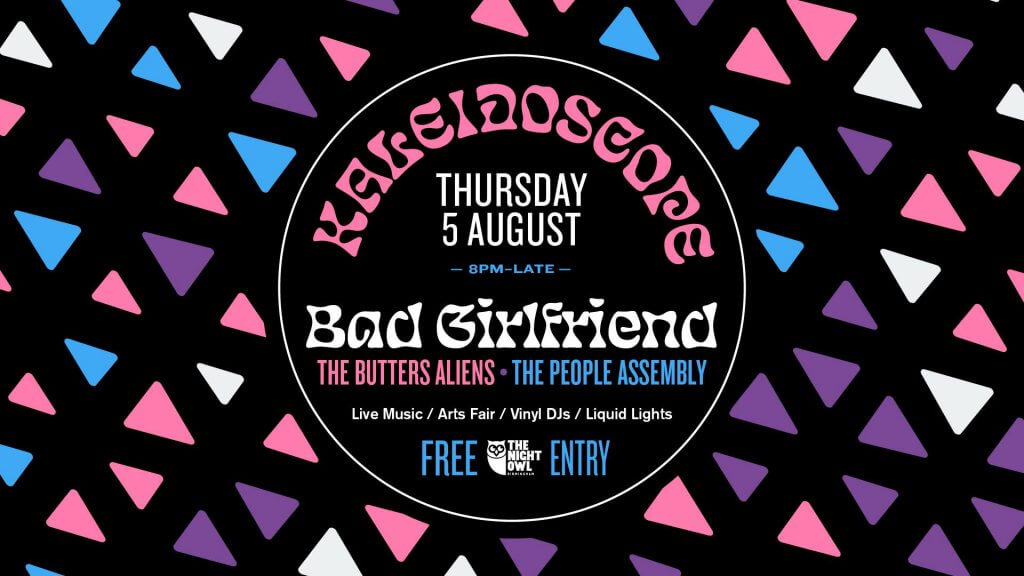 With freedom looming around the corner, we’re once again hoping and praying that this is our first normal, free entry, standing event in almost 18 months.
As always we’ll be hosting an array of amazing local bands, artists DJs and more under the liquid lights.
*** LIVE MUSIC ***
// BAD GIRLFRIEND //
What better way to kick off our first standing event of the year, with no other than the notorious Bad Girlfriend. Twenty months after their infamous Christmas show at Kaleidoscope, this local garage punk three piece need no introductions around these parts, but here goes: Antagonistic, cathartic, raucous, insane – this show will have it all. Not for the feint hearted.
Check out a video of their live show here: https://www.youtube.com/watch?v=4xwk-bbIh_A
// The Butters Aliens //
Returning for their second Kaleidoscope, The Butters Aliens (TBA) are a young, eccentric modern-era punk band that inhabit Birmingham’s underground scene. Citing influences as varied as FIDLAR, Ratboy & Skepta, their energetic and chaotic live set is one not to be missed.
Listen to latest EP Sick Bowl here: https://www.youtube.com/playlist…
// The People Assembly //
Leicester-based post-space collective The People Assembly haven’t wasted a second painting their world as they see it, gaining a reputation for fanatic, confrontational (and sometimes destructive) live performances involving a constantly rotating cast.
Listen to latest single R Skeletons Balloons here: https://open.spotify.com/album/3xLQiFq3XVpiEYK35kgiYb…
*** ART ***
// Dion Kitson //
www.dionkitson.com
www.instagram.com/dion.kitson
// Bonus Prize //
www.fungibletokens.bigcartel.com
www.instagram.com/bonusprize
// Molly Cleaver //
www.mollycleaver.co.uk
www.instagram.com/mollycleaver
*** DJs ***
Resident Kaleidoscope DJs will be joined by some special guests announced soon.
See you in the Kaleidoscope.
+ Google Calendar+ iCal Export