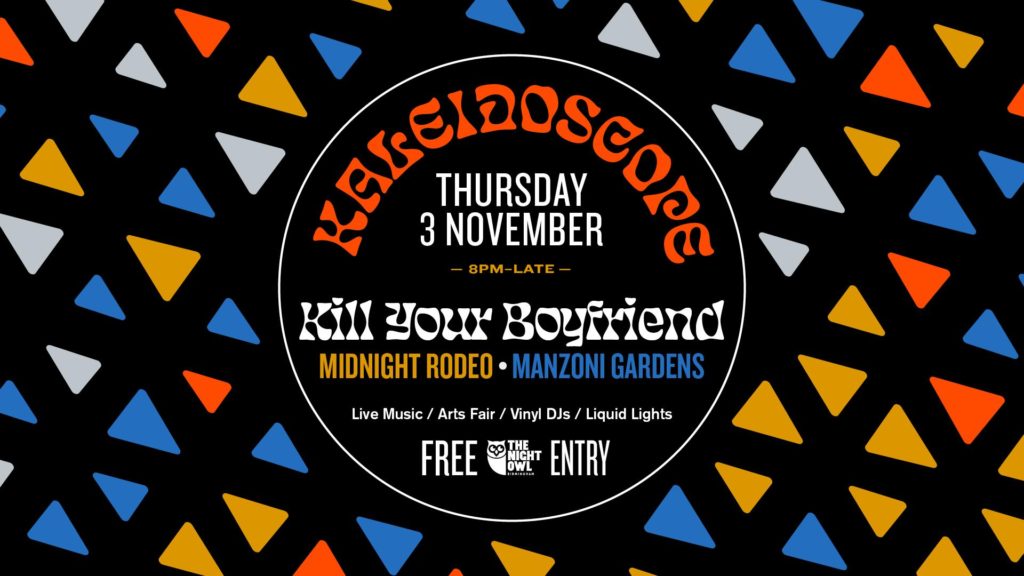 *** LIVE MUSIC ***
// Kill Your Boyfriend //
Kill Your Boyfriend is a two-piece psych / post-punk / dark wave / shoegaze band formed in 2011 in Venice, Italy, consisting of Matteo Scarpa on guitar and vocals, and Antonio Angeli on drums. Their much anticipated new album Voodoo is released on 14th October on Sister9 Recordings, and we’re delighted to welcome them to Kaleidoscope as part of their UK tour in support of the release.
Check out latest single The King here: https://open.spotify.com/track/4SHIA6y1pJ8fp4PMc536TW…
// Midnight Rodeo //
Midnight Rodeo return to Kaleidoscope for the second time after their delightful debut performance exactly a year ago, supporting Black Doldrums. Formed in the prodigiously convenient summer of 2020, Midnight Rodeo are a six-piece musical spaghetti western based in Nottingham, drawing influence from Allah-las, Juniore, La Luz and Pink Floyd. Lending eclectic instrumental support to Maddy’s alluring vocals the band create a densely layered, atmospheric sound that combines slick psychedelia with Morricone-esque filmic soundscapes.
Check out latest single Shootout Sunday here: https://open.spotify.com/track/0oPns2xGCcnlyBKu7QQOBb…
// Manzoni Gardens //
Manzoni Gardens take their name from a Birmingham city centre green space demolished long ago, that once boasted the now infamous giant statue of King Kong – a nod to a utopian brutalist vision of the future that was never fully realised. The band’s sound is constantly evolving, blending 80s new wave and jangle-pop with scrappy college rock and a shared love of 90s alternative legends such as Radiohead and The Smashing Pumpkins.
Check out latest single House Of Lomax here: https://open.spotify.com/track/4ZYEnlxTIJi37RcxcycTGA…
*** ART ***
// Punks & Chancers //
instagram.com/punksandchancers
punksandchancers.co.uk
// Lindau Art //
instagram.com/plindauart
paigelindau.co.uk/shop
// 96.chsa //
instagram.com/96.chsa
// CJ Russell //
instagram.com/cjruss94
Plus more TBA soon…
*** DJs ***
Kaleidoscope resident DJs will be spinning grooves all night, with some very special guests, announced soon…
See you in the Kaleidoscope
+ Add to Google Calendar+ Add to iCalendar